My screen of Manjaro Netbook Edition after a weekend of tweaking: 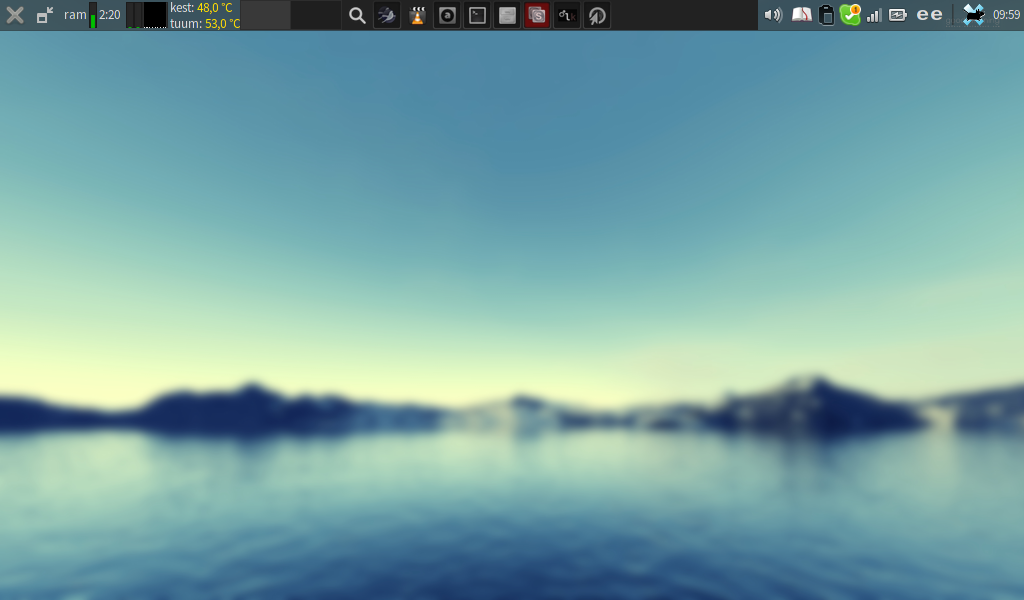 The login manager is MDM, known from Linux Mint. In my opinion it’s too heavy for netbooks. In Manjarobox you get Slim, which is much more appropriate. This was the first thing I changed to reflect Manjarobox after I installed the Netbook Edition.

Manjarobox features Openbox, which is a light desktop. Light basically means that there are no desktop icons and the apps menu opens with right-click on the desktop, instead of having a dedicated taskbar button. Still, for example the invaluable systray is there.

In comparison, Netbook Edition features Xfce, a full-featured desktop environment, but with some important alterations specific to Netbook Edition. In normal Xfce you expect desktop icons. These are not available in Netbook Edition. The rest is pretty much there, even the new feature of window snapping-and-tiling-by dragging. (In Manjarobox this last functionality is available with keyboard shortcuts after some hacking.)

The most visible departure from the usual Xfce is the central taskbar in Netbook Edition. The central taskbar is replaced with DockbarX. The taskbar in normal Xfce behaves like in XP, whereas DockbarX always iconifies the open apps. When hovering the mouse pointer above the icon in DockbarX, you see the list of open windows with an opportunity to switch to them or close them with precision. Right-click on the icon provides you with some actions, such as pin, (un)maximise, and close the application – Win 7 style.

There’s a unique default behaviour configured into Netbook Edition’s desktop environment: Apps start up with maximised window. I was wary of this behaviour at first. This was one of the reasons why I didn’t try Netbook Edition on my netbook sooner. However, now I have seen it in action and it seems that this behaviour makes kind of sense in netbooks.

Some oddities occur due to this maximisation behaviour, for example when you copy files in Thunar, a full-screen progress window pops up instead of a small progress bar. Still, by default you have the well-considered unmaximise button on the taskbar. It’s also possible to easily configure a keyboard shortcut to toggle window maximisation in Xfce, so in the end this is not a problem. It’s a feature.

Compared to Manjarobox 0.8.8 which was very minimalistic, Netbook Edition comes with more apps, such as Midori browser (versus no browser in Manjarobox 0.8.8), Xfburn (I don’t know why this is here; how many netbooks have a DVDRW drive?), Audacious, VLC.

In my screenshot above there are some visible additions to the default selection of apps in Netbook Edition:

THE BEST IN NETBOOK EDITION

In comparison with Manjarobox, the screen lock and suspend at lid-close is configured properly out of the box. This how it should be in any OS version specifically catering to laptops and similar.

For this edition, the developers have optimised the kernel (for the i686 architecture version; Netbook Edition with x86_64 architecture doesn’t have this). I am too dumb to understand the benefits of the optimised kernel, but there’s more: Also Flash plugin, which I thought inappropriate for my netbook and I didn’t even try in Manjarobox, is specifically optimised and works like a snap in all browsers!

Now, disappointingly again, these optimised packages – linux312-netbook and flashplugin-netbook – don’t seem to be readily available in the repositories. Manjarobox users would really appreciate them.

I am a Skype user, so a remark on this too. In Manjarobox, Skype tended to crash in the middle of some kinda hot webcam sessions. Without much research I thought it can be blamed on hardware weakness. Now on Manjaro Netbook Edition these crashes do not occur. Either I got lucky or something’s truly optimised here 🙂

All-in-all, there are some important things in this edition that make it worth trying, such as the optimised Flash plugin and considerately pre-configured lid-close. The misses are minor and easily remedied. If you have a netbook and some experience with Manjaro, give it a try.

My netbook has 1 GB RAM and Intel Atom CPU N450 (-HT-) clocked at Min:1000.000Mhz Max:1666.000Mhz. Netbook Edition’s Xfce desktop works here almost as snappy as Openbox that I tried earlier. I was perfectly satisfied with Openbox, but I like some of the added functionality in Netbook Edition, such as the window tiling by dragging, and I have learned to like the auto-maximised windows. With less RAM and weaker CPU however, Openbox would still be a smarter choice considering the resources.

Here’s a follow-up to the blog post Create a bootable USB stick in Linux.

The first time I reformatted my USB stick from bootable to a normal file-storage device, I followed some other instructions, but now Webupd8.org instructions worked.

3.There will be the description of the activities of the last active device. The device name will be between brackets as [sdd], [sdc] or [sdb]. See what you got and remember it.

4. Unmount the device. It should work by issuing in terminal:

The sdb bit should be your own device of course. However, sometimes the command doesn’t work. I had to use the graphical file manager to unmount the device.

5. Reformat by issuing in terminal:

The -F 32 can be omitted, but it ensures the most Windows-friendly format.

The ‘Label’ gives the device a name. You can have ‘MyUSB’ or such, if you like.

6. After the last command has done its thing (may take time), remove and reinsert the stick to test the result.

When the aim is to format the stick as ntfs instead of msdos file system, step #5 is different:

All the other steps are the same.

After a system update, Mplayer failed to launch. It gave this error:

Looking around the web for solution, I found that the fault is in the dependency called lirc-utils.