So, what does Tmux do? After installation, open up a terminal emulator and type tmux. You will have a new emulator screen with a cute status bar. Open an app there or leave a process running.

Next, type Ctrl+b. This is the prefix for all the commands given to Tmux rather than to the app or process (called “client”) you are running inside of it. The prefix done, press c (i.e. prefix+c). A next screen opens up. The status bar will show you how many screens (called “windows”) are opened and you can determine in which one your current focus is.

To switch between windows, press prefix+n (for next window) or prefix+p (for previous window). By default, these keys should cycle through all, i.e. prefix+n should take you to the first window, when you are currently in the last window.

Prefix+o will move focus to another pane in the current window. Prefix+space will switch to a different layout. There are several layouts, so try prefix+space multiple times to see them all.

Prefix+z will zoom the focused pane over the entire window. Prefix+o (i.e. move focus on another pane in the same window) shrinks the zoomed pane.

Resizing the panes should be possible by dragging the border of the pane with mouse. The rest of the keyboard shortcuts are under prefix+?.

There are enough basic intros to Tmux on the internet already, so I’ll better focus on the awesome copy-paste function, which is otherwise rather difficult to achieve in terminals.

There are two modes for copy-paste, Vim and Emacs. The more likely default is Emacs and I like it better, so here’s a list of its basic routines.

Prefix+[ or Prefix+PageUp enters the copy mode. An indicator lights up in the upper right corner.

Upon copying, the copy mode indicator vanishes from the upper right corner, i.e. the copy mode terminates at Alt+w. If you want to exit the copy mode any time when it’s active, press Escape or Ctrl+c.

To paste, move with arrow keys (and switch the panes and windows if necessary) to the spot where you want to paste the copied content (called “buffer”). On the spot, press prefix+] to paste or prefix+= to see the buffer and then Enter to paste.

Copying and pasting in Tmux is rather important, so let’s try again. There are some nice pages in Tmux, such as the internal help page, which are in copy mode even without entering the copy mode, and this is good for exercise.

A note: Tmux copy-paste buffer is available only inside Tmux, not in other apps and not on the clipboard.

A Small Exercise of Copying and Pasting in Tmux

Attaching and detaching sessions is an advanced feature, but worth some practising too. First let’s go over some terminology again.

Clients (apps or processes) run inside panes and there can be multiple panes in a window (a single screen view of the terminal emulator or console). All these windows make up a session.

The new session starts as soon as Tmux is started. Prefix+s provides a list of running sessions and an opportunity to switch between them. Selecting a session this way is called attach.

Prefix+d detaches the session. This means that even when you close the terminal emulator where you had Tmux running, all the processes in the session remain active as long as the user session in the computer remains active (i.e. don’t log out, don’t shut down the computer).

In console, log in as the same user and type tmux. In Tmux, press prefix+s. You should see at least two sessions running. That’s the idea of attaching and detaching.

There should be a configuration file located at /etc/tmux.conf, but if not, create an empty file at ~/.tmux.conf. As long as it’s empty, Tmux uses its defaults. If there’s something in ~/.tmux.conf, Tmux uses that. My ~/.tmux.conf looks as follows.

If Tmux seems hard, try Byobu that is gleefully configured out of the box and pretty much explains itself as you use it. The keybinds are totally different from Tmux though, no relation at all.

Top or ‘top’ is a process viewer-and-manager for Linux. Another one is Htop or ‘htop’ that comes with more one-key shortcuts and a saner default display (colours that are more likely to be visible). However, Htop’s single-hit keybinds for e.g. killing the currently selected process easily make the user vulnerable to fatal accidents. Also, Htop is not pre-installed too often, so it’s a good idea to know some Top. It’s not too difficult.

Thunar is my preferred file manager, but a lack of dual panes (F3 in e.g. PcmanFM and Nemo) for easy drag-and-drop is sorely missing. There’s an installable patch somewhere on the internet, but patches are too geeky to install. Here’s how to survive without patches, while not missing out on the functionality of dual panes in Thunar.

That’s right! Two windows provide the same functionality as dual panes, so get accustomed to opening up two windows of Thunar, arrange them neatly, and then drag-and-drop etc. as you wish. Xfce, the default desktop environment which includes Thunar, has some auto-tiling functionality these days, which comes in conveniently handy for arranging windows. Depending on the way you arrange the windows, you may want to get rid of the sidebar in one of the windows. The keyboard shortcuts Ctrl+b and F9 do that in Thunar.

Method number 2 requires two things: 1. Midnight Commander and 2. Creating a custom action in Thunar. If you like Midnight Commander, a command-line file manager with dual panes, and you have it installed, this method is for you. This way, in addition to dual panes, you will get also the flexibility and speed of command line. 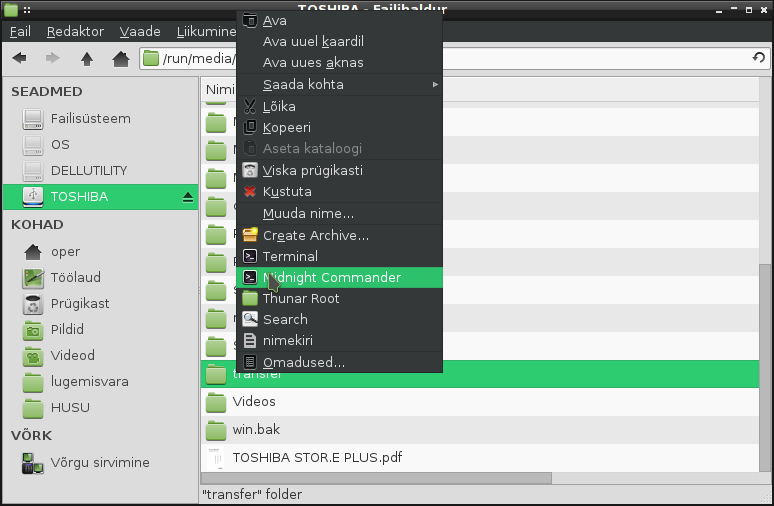 An earlier blog post described how to set up custom actions in Thunar. In my case, the code that worked for this custom action:

In addition to this code, remember to unset everything in Appearance Conditions and leave only Folders – the same appearance conditions as for Terminal custom action.

This will launch Midnight Commander with -b option so as to get rid of its default colors. If you have a transparent terminal emulator, the additional advantage with this option is that you will get background visibility to Thunar. This is properly triple panes, even better than dual panes. 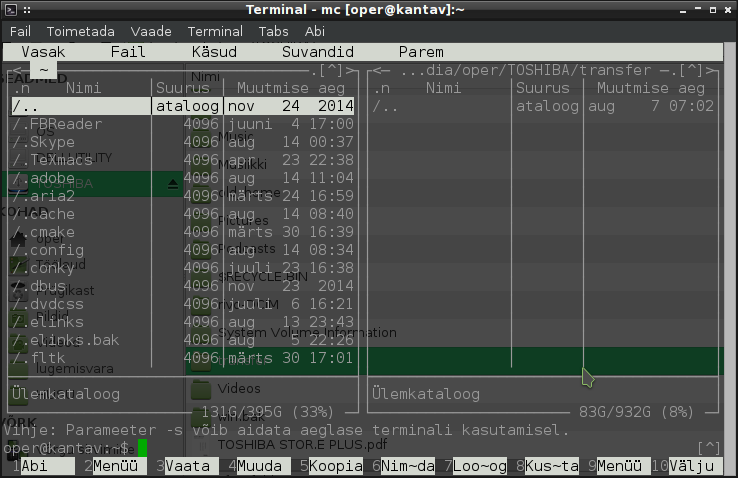